Nations in Jerusalem at Pentecost Map

People visiting Jerusalem on the day of Pentecost in Acts 2

The day of Pentecost marks the birth of the New Testament Church and we find the account of the events that took place on that day in Acts 2.

The chapter starts by describing the coming of the Holy Spirit upon the faithful believers, apostles and disciples of Jesus, gathered in Jerusalem in the Upper Room and continues by recounting the events that followed, when those believers began preaching to devout men who were visiting Jerusalem.

Acts 2:5-8 - "There were dwelling in Jerusalem Jews, devout men, from every nation under heaven. And when this sound occurred, the multitude came together, and were confused, because everyone heard them speak in his own language. Then they were all amazed and marveled, saying to one another, 'Look, are not all these who speak Galileans? And how is it that we hear, each in our own language in which we were born?'"

Why were all these People gathered in Jerusalem on that particular Day?

They were people who had gathered in Jerusalem to celebrate Shavuot, a.k.a. the Feast of Weeks, around late May or early June. On Shavuot all Jews were commanded to travel to Jerusalem to commemorate that feast.

The Hebrew word Shavuot means "weeks" or "sevens", and hints to the fact that this festival happens exactly seven weeks after Passover (a.k.a. Pesach), and Passover is the day that God freed the Israelites from slavery and oppression and brought them out of the land of Egypt.

The Feast of Shavuot commemorates the anniversary of the day when God gave the Torah to the Hebrews at Mount Sinai. It is also called the Feast of Ingathering, as it marks the wheat harvest in Israel (Exodus 34:22).

Pentecost is the Greek name for Shavuot and literally means "fiftieth (day)", because it's commemorated seven weeks or 49 days after Passover; if we include the day of Passover, the feast falls 50 days later.

Who were all these People who gathered in Jerusalem?

They were devout Jewish men from "every nation under heaven" and some proselytes, who were visiting Jerusalem to commemorate Shavuot and thank the Lord for giving them the Torah.

Acts 2:9-11 - "Parthians and Medes and Elamites, those dwelling in Mesopotamia, Judea and Cappadocia, Pontus and Asia, Phrygia and Pamphylia, Egypt and the parts of Libya adjoining Cyrene, visitors from Rome, both Jews and proselytes, Cretans and Arabs, we hear them speaking in our own tongues the wonderful works of God."

Parthians, Medes, Elamites: They were faithful Jewish men living in what is present day Iran. Parthia was located in the northeast, Media in the northwest, and Elam in the south just north of the Persian Gulf.

At the time of the Book of Acts, all these regions were parts of the Parthian Empire. They were most likely descendants of those who had been deported after the fall of the Kingdom of Israel (Northern Kingdom) and the Kingdom of Judah (Southern Kingdom), and that never went back to live in Israel, but continued to live in those regions.

Mesopotamia: They were faithful Jewish men living in what is modern day Iraq, Kuwait, and Western Syria around the Tigris and Euphrates rivers. At the time of the Book of Acts, Mesopotamia was a Roman province.

Judea: They were faithful Jewish men living in the area around Jerusalem, which is present day Israel and Palestine. Judea was also a Roman Province at the time of the Book of Acts.

Egypt: They were faithful Jewish men living in what is also known today as Egypt. This was a Roman province, as well.

Rome: They were faithful Jewish men and proselytes, who had converted, living in Rome, at that time capital of the Roman Empire and today capital of Italy.

Cretans: They were faithful Jewish men living on the island of Crete, in the Mediterranean Sea, now part of Greece. At the time of Acts 2, Crete was part of the Roman province called Cyrenaica in present day Libya.

Arabs: They were faithful Jewish men living in the Arabian Peninsula, present day Saudi Arabia, and perhaps other countries in that region.

In conclusion, the New Testament Pentecost coincides with the Old Testament Feast of Shavuot, and the people gathered in Jerusalem, mentioned in Acts 2, were Torah keeping/Law abiding Jewish people, who lived outside of Israel, in other gentile nations, and who had journeyed to Jerusalem, as commanded, to participate in the commemoration of the giving of God's Law on Mount Sinai through Moses.

Nations in Jerusalem at Pentecost Map 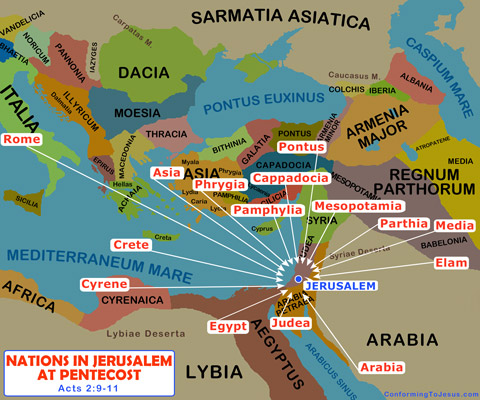 The "Gift of Speaking in Tongues" mentioned in First Corinthians is not what you might think it is.

The concept behind Speaking in Tongues has historically always been misinterpreted by the church and stems from a theological error. Today no one actually teaches what it really is.

If you would like to know what the "Gift of Speaking in Tongues" is and read about our exciting findings, check out our article on this topic in our Bible Articles section.

Table of the Book of Acts

Map of Israel at the Time of Jesus Christ

Map of the Roman Empire at the Time of Jesus

Map of the Assyrian and Babylonian Captivity of Israel and Judah