Chronology Chart from Adam to Abraham

Timeline from Adam to Abraham - Lifespan of the Biblical Patriarchs

From Adam to Noah, or Noe` or Noach, there were ten generations, making Noah the tenth and last of the pre-flood Patriarchs.

From Noah to Abraham (originally Abram), the Patriarch of the Hebrews and Arabs, there were also ten generations, making him the tenth Patriarch from Noah.

The Lifespan of the Biblical Patriarchs before the flood was considerably longer than that of those after the flood.

Let's see what the Bibles says about some of the Patriarchs of the Bible from Adam to Abraham.

Although we do not know the precise year of Creation and Adam's fall into sin, what we do know is that Adam was 130 years old when his son Seth was born.

Adam's fall into sin must have occurred several years, possibly decades, prior to the birth of Seth, as Cain and Abel were born after the fall and well before the birth of Seth. They were both adults when Cain killed his brother Abel and Abel was dead by the time Seth came into the world.

The 5th chapter of the Book of Genesis, the Book of the Generations of Adam, provides us with a list of the descendants of Adam who walked in the righteousness of God's Laws and Commandments, from Seth to Noah, recording their ages at the birth of their faithful and righteous sons and their ages at death.

Adam lived up to the 56th year of Lamech, the father of Noah, but did not get to see the birth of Noah. This chapter states that Adam had other sons and daughters after Seth, but does not give us their names.

Seth replaced his righteous older brother Abel, who was murdered by his oldest brother Cain in Genesis 4.

Genesis 4:25 - "Adam knew his wife again, and she bore a son and named him Seth: 'For God has appointed another seed for me instead of Abel, whom Cain killed'."

At the birth of Seth, Adam was 130 years old and did not raise him according to righteousness; he taught him to walk in his sinful ways instead of teaching him to walk in the righteous ways of the Lord. In other words, Adam raised Seth to be just like him.

Genesis 5:3 - "Adam lived one hundred and thirty years, and begot a son in his own likeness, after his image, and named him Seth."

He began to differentiate himself from the image and likeness of his father and to "call on the name of the Lord", a common Hebrew idiom indicating that someone was seeking to conform to God.

The Bible suggests that, after the birth of Enosh, each man listed in Seth's bloodline taught his son to walk in the ways of his forefather Seth. And this tradition of faithfulness to God was passed on from father to son all the way to Noah, Abraham and ultimately Jesus.

This ensured that at least one righteous man would be found in each generation, one who would know the Lord and who would decide to be conformed to His image and likeness, in other words, to the Lord's righteousness.

In the generation of Enosh (or Enos), men began to walk with God and the Lord became their Father, a family of faithful children willing to reject the world and be conformed to Him.

Oldest man in the Bible and perhaps the oldest man that ever lived on earth!

Lamech was Noah's father and he was a righteous man. Not to be confused with another man by the same name, who was a descendant of Cain and who murdered two human beings out of revenge. Interesting fact, Noah's father Lamech was 56 years old when Adam died.

The genealogy of Noah with his descendants is recorded in Genesis 10. Noah met all the pre-flood patriarchs, except Adam and Enoch and was 14 years old when Seth died.

Noah was 600 years old when the waters of the flood covered the earth and destroyed it. He, his family and his animals were the only survivors of the Great Deluge. They survived by planning carefully and preparing beforehand, by sheltering inside the ark Noah had built before the catastrophic event and by eating the food they had stockpiled inside.

To learn more about Noah preparedness and how to be wise like him, check out our article: How should Christians prepare for Food Shortage following Noah's and Joseph's example?

Shem was Noah's second born, the only one who walked in the ways of his earthly father Noah and in conformity to God.

Eber was the man from whom the Hebrew people got their name and who gave the name to the language they spoke.

Before the building of the Tower of Babel the people "spoke one language", a common Hebrew idiom meaning they were of one accord and conformed to one another.

After the rebellion at the Tower of Babel, the people began to "speak other languages", a common Hebrew idiom meaning they were no longer of one accord, no longer conformed to one another, and began to differentiate by walking in accordance to the desires of their flesh.

Every family and clan was different, as the sinful traditions of the fathers were passed on to their children.

This was the beginning of the so called "cultures" of the world, every nation conformed to the image and likeness of their earthly fathers who had forgotten the ways of their former Heavenly Father.

Following this rebellion to God, men were no longer able to get along and understand each other. Conflicts began to arise and they decided that it was best to separate and "divide the earth" to the nations that descended from Noah. This occurred in the generation of Peleg.

A handful of people continued to remain faithful to God, and we find their names in the chart below.

Genesis 10:25 - "To Eber were born two sons: the name of one was Peleg, for in his days the earth was divided; and his brother's name was Joktan."

Terah was Abraham's father, he dwelt in Ur of the Chaldeans, located in modern day southern Iraq. The city of Ur was an important and wealthy Sumerian city-state in ancient Mesopotamia, a major urban center and a major port on the Persian Gulf.

The city of Ur controlled much of the commerce into Mesopotamia and traded with many parts of the known world: gold, silver and precious stones, among other things. The city had a stratified social system, with upper and lower classes, which included slaves. One could enjoy great luxury and splendid mansions if he belonged to a high social rank.

Genesis 11:27-28 - "This is the genealogy of Terah: Terah begot Abram, Nahor, and Haran. Haran begot Lot. And Haran died before his father Terah in his native land, in Ur of the Chaldeans."

Ur's economic life was centered on trading and imports, wealth and greed were all around and one could just breathe them in the air. Spiritually, the city built on self became even more corrupted by the idolatry of material things, high social positions and wealth by amassing fortunes tainted by the blood of exploited slaves.

The city's patron deity was Nanna, the Sumerian and Akkadian moon god. The ruins of the Ziggurat of Ur, which contained the shrine of Nanna, were partially restored and are still visible today. There was no way one could serve God in a city like that, even Terah and his family ended up bowing down to the idolatry of Ur.

But one day they too began to "call on the name of the Lord". That was the day they repented and decided to leave Ur; they crossed the River Euphrates and moved to the land of Canaan, where they and their descendants could serve God and live in peace.

Genesis 11:31 - "Terah took his son Abram and his grandson Lot, the son of Haran, and his daughter-in-law Sarai, his son Abram's wife, and they went out with them from Ur of the Chaldeans to go to the land of Canaan."

To learn about Abraham's Family Tree and history Click Here.

Chronology Chart from Adam to Abraham

"Why do the Righteous suffer?" is a million dollar question to which everybody would like to receive an answer.

Since ancient times, philosophers and religions have tried to solve this apparently complicated and unsolvable mystery, but failed. Today you can finally learn the truth.

If you would like to know why the Righteous and the Innocent suffer and solve the mystery, check out our article on this topic in our Bible Articles section and read about our exciting findings. 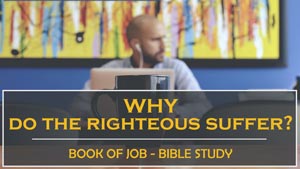 Chart of the Genealogy of Abraham

Chart of Chronology from Adam to Noah

Table of the Patriarchs Before and After the Flood